KANSAS CITY, Kan. — Kevin Dickerson, a 50-year-old electrician from Topeka, has struggled with essential tremor much of his life. The uncontrollable movements became so severe he could barely drink from a coffee cup or write his name, let along safely operate a drill.

Medications weren't helping, so Dickerson turned to neurologists at The University of Kansas Health System. They used an innovative deep-brain stimulation (DBS) treatment, the first of its kind in the area.

Dickerson's wife, Debbie, nearly gasped when she saw the results a month later.

"I've watched Kevin struggle with this for over 20 years – and watched my teenage son start to struggle with it," she says. "So it got to me to see him hold his hand out and not shake. That's why today is so amazing."

DBS treatment isn't new: Neurologists have used the approach thousands of times since the mid-1990s to help patients with Parkinson's disease and other movement disorders better control their motor functions.

During the procedure, a small device called a neurostimulator is implanted under the skin in the chest. It sends an electrical pulse through a lead, or wire, implanted in the brain, blocking the brain's erratic signals that cause a patient's involuntary movements.

The new DBS treatment pioneered at our health system incorporates several new technologies. Called the Infinity System, it features a segmented lead for the brain, allowing neurologists to better direct the device's electrical stimulation to the intended target area in the brain, meaning fewer side effects for patients, such as numbness, tingling or slurred speech.

Infinity also allows physicians using an iPad to be more precise in programming the pulse in the patient's brain. And patients use wireless programmers the size of a smartphone to fine-tune how they control their tremors.

"The wireless platform makes it more convenient for the patient and easier for us to do the programming," says neurologist Vibhash Sharma, MD. "But the real advantage is the directional lead, which allows us to steer the electrical current in the brain." 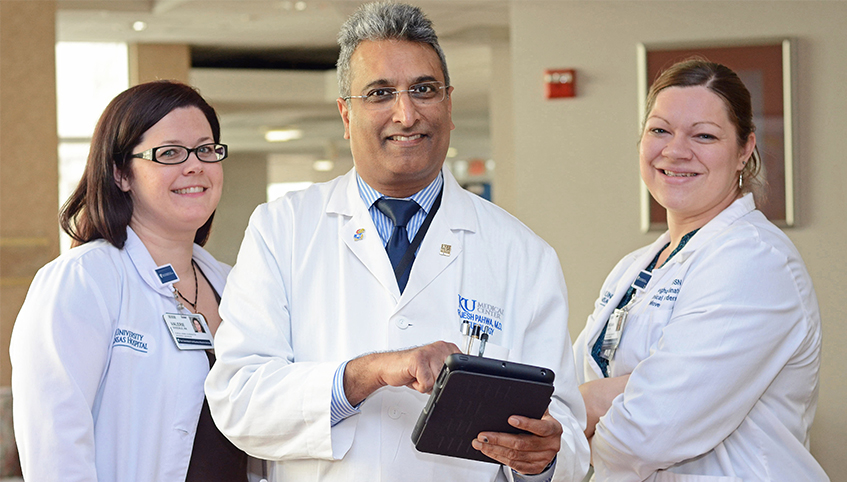